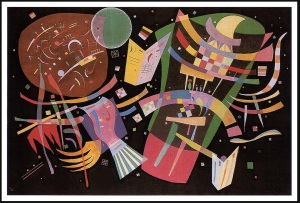 I’m not entirely comfortable with working abstract so, for me, that means working abstract for a while. I started, as I often do, with a class.  And a painting that started as a light reflection became an examination of the ephemeral nature of my usual work and the value that is placed on my time when I’m painting compared to when I sew. On this basis alone, I would recommend the class.

I was drawn to Kandinsky’s Composition X because of the chaotic joy in it. My readings said that painting was, in part, an expression of the inner emotional feelings that Kandinsky was experiencing near the end of his life. I’m (hopefully) not near the end of my life but I am currently giving a lot of thought to my time, how I’m spending it, and how I want to be spending it. I think this is actually something that I can explore. On another note, I just loved that what originally looks like little speckles are actually carefully positioned and executed squares.

While his shapes were inspired by the parts of a piano, I came from a background in textile arts and some of his patterns really resemble old traditional quilt blocks. I’m not a traditional quilter but that is how I learned a lot of the basic skills that I needed. When I was sketching, I played around with some of the shapes found in my particular craft.

Because there was ultimately going to be a lot of objects on the canvas, I used a fairly wide palette, staying within the middle range of tone though, nothing too bold as I thought that keeping the black background would make the colors pop like Kandinsky’s. I spent the evening mixing paint colors. This was one of the biggest things that I was afraid of when I went through art school and now I kind of love doing it. I flattened a few of these out a little more with a white to get coverage over that black canvas. I used a mix of burnt umber and ultramarine for my black because I just find it a little richer than a straight mars black out of the tube.

I tweaked the objects a little more when I actually put them on the canvas, just stretched and stylized them a little more. I’m finding that my tendency to be literal just keeps creeping in!

I was looking forward to the next step, likening it to the embellishment stage of my textile projects. In a lot of my pieces, that can mean dense hand-stitching or beading. Across all mediums though, layering transparent colours to create new areas of colour has been a personal fascination and something that I return to repeatedly. Composition X gives that same effect with the change in paint when areas intersect.

The more elements of textiles that I added, the more I thought about the tendency through history to devalue the artistic work that goes into fibre arts and other media that have been used primarily by women. That my fledgling paintings stand a better chance of hanging on a gallery wall than quilted pieces that are composed of thousands of stitches encompassing years of work. That my work with the Costume Museum has given me the privilege of seeing hidden masterpieces which might have disappeared from the world had someone not recognized that it was work worth saving.

It’s one of my favourite soapboxes ;D