If I were another person, I would say that I had gone through a printmaking phase about 10 years ago. I’ve had occasion to use the things that I learned at that time all across the board with other projects though so it never really felt like a phase. That being said, I still hadn’t been to the Martha Street Studio of the Manitoba Printmakers Association (hereby shortened to Martha Street) in many many years for anything other than watching the Under Pressure Steamroller Festival.

A renewed commitment to semi-regular artist dates had me looking beyond walks around interesting parts of the neighbourhood and into classes and workshops again. Since I have precious little experience with linocut and I love classes that use non-traditional materials for art, Slapshots and High Fives was perfect. It was led by two of the artists in town for the opening of the Hive Mind: Print + Performance exhibition that opened the previous evening.

The first of the two workshop projects used traditionally prepared sheets of lino, the designs were left to us but it was fairly straightforward. The difference came in during the press… or, in this, case, the workgloves nailed to plywood. Rather than passing the paper and lino steadily through a machine for a consistent pressure, we fixed the paper and lino to boards and celebrated like we had just won game 8 of the Summit Series. The results were surprisingly consistent provided you went at it with no hesitation. 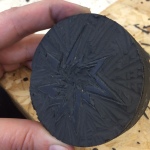 The second project though… talk about using the materials around you. Rather than using traditional lino, we carved up a few handy hockey pucks. Yes. I need way more practice just for the ongoing safety of my fingers but we kept it simple this first time around with something like emojis.

Once we finished up all the carving, we went outside and that’s where the slapshots came into play. I didn’t play hockey as a kid but I actually managed to land the puck on the paper every time. We only took a few shots since there were a lot of people but I played with inking it when I came home just so see what I had. I used a hammer to get that kind of force tough, last minute solution.

I think I’m finally going to make that Fuck It stamp for myself because hammering at that puck was awesome.