I usually work in a much more realistic style but I wanted to play a little bit more to balance things out. Charged with finding an animal that was already cute and another that most definitely wasn’t, I gave it a shot. END_OF_DOCUMENT_TOKEN_TO_BE_REPLACED

The sunset postcard is probably the best watercolour landscape that I’ve ever done. I don’t generally do well with the loose or fast style of painting but I had taken a class that taught a different technique for painting gradients and it totally worked for me. I painted the postcard in the morning and in the evening, dropped it into a mailbox bound for Hong Kong. Not even an envelope for protection, just naked. END_OF_DOCUMENT_TOKEN_TO_BE_REPLACED 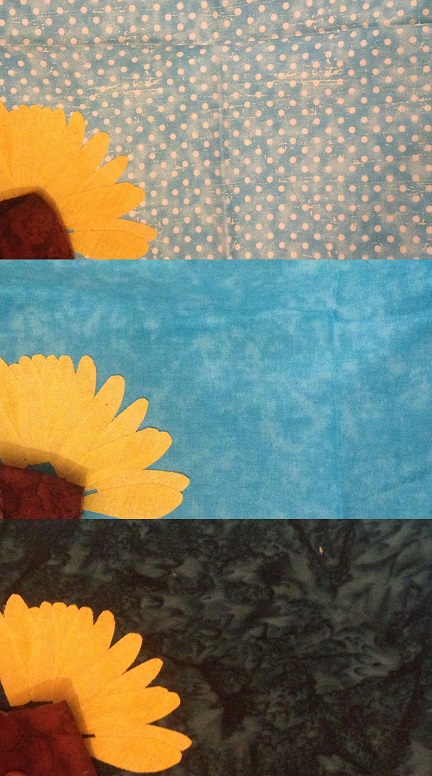 I don’t think the yellow will work for gerbera daisies but it makes for one hell of a black eyed Susan! The bottom fabric is reading as a dark grey but it’s actually the leading contender as a dark mottled blue. This will end up as a postcard eventually and the search for the right daisy yellow continues. 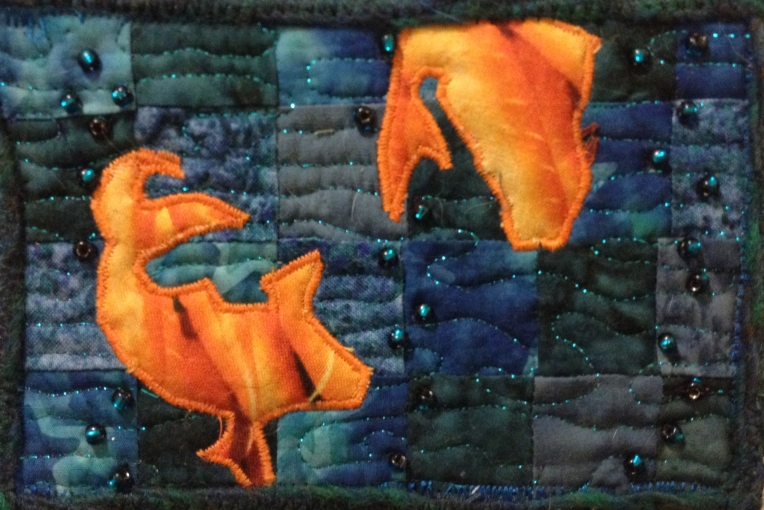 Turned another koi test piece into a postcard. I think I’ve found the right combination now, the high metallic blue with the larger glass beads shows up just right. I finished this edge with some Japanese Koro felting yarn but the machine flattened it more than I had intended. If I’m going to use it, it will have to be attached by hand for the effect I’m looking for. 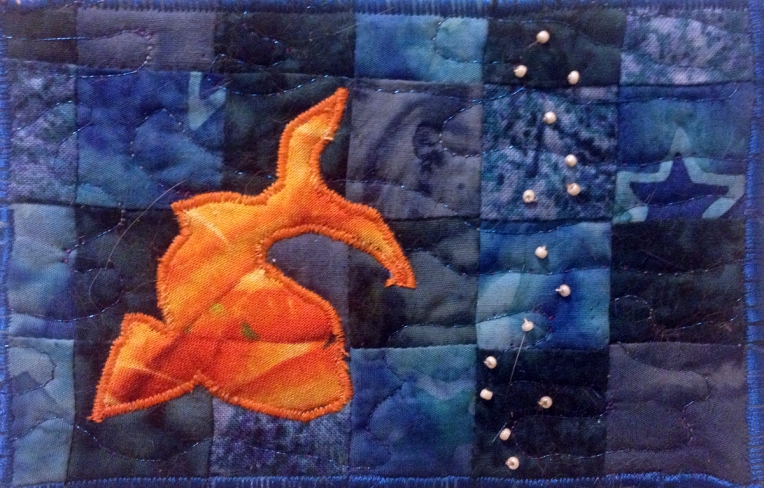 I’m hoping that this little guy represents the beginning of a finishing binge. It may be a simple little postcard but this is the first piece of art that I’ve completed in much longer than I care to admit.

Roughly 4″x6″ he’s a thread and quilting study for a larger piece and a way to brush the dust off of my free motion skills!

Playing with found objects (a cabochon), Angelina fibre (for the first time and, yes, it is impossible to photograph), and a piece of a net “disco” scarf that my daughter got with a pair of jeans once. The hand-dyed blue was just a scrap from my stash and I had the seed beads from a previous project. I have to cop to the fact that I was listening to Kate Bush’s “Nocturne” from her Aerial CD while I was working on this, “listening” as in having my iPod play it on constant rotation, over and over and over and over again. I would be so much fun to share a studio with :D

I couldn’t post this one before because I sent it to someone and they subscribe. I did finish it a couple of weeks ago though.

I’m not even going to post a picture of this one yet and I’m not going to say anything about it. Well, almost nothing. It’s another snow landscape and this was the first one where I tackled the hoarfrost.
Everything else is fairly simple. The trees were awful. So far, most of the techniques that I’ve tried look pretty good on the little samples and then like complete suck on the piece.

You know, I think I’m going to leave the trees off for now. I’ve got an idea for the sky. I’ve got a little bit of that blue left for another run at the trees with a different layout. Ah, lemonade.

4″x 6″ postcard. I have a lot of winter photographs courtesy of my mother. Any morning that we woke up to hoarfrost was an excuse to drive outside of town and take pictures of the trees with their ice coats. Every one of those pictures had the shadow silhouette of my mom, elbows sticking out, stretching forward from the bottom of the picture as the sun was at her back.

I was really tempted to add a little gray smudge at the bottom with her elbows sticking out. Maybe I will in the larger version.