The movement is becoming more natural but my speed has only picked up marginally. Keep at it, I guess! I’m pretty sure there’s no hope of finishing it for the March 1 deadline but I’m going to keep working at it… I’m easily 10K stitches behind on my lifetime total! 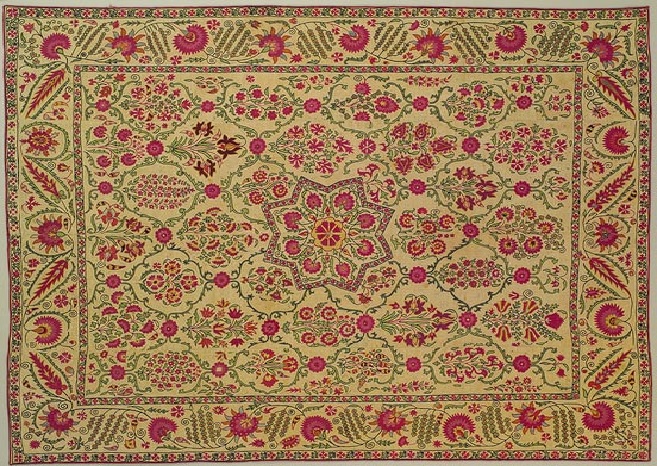 In Uzbekistan and regions of Central Asia, the walls are lined with colourful embroidered cloths called suzanis. The large cloths are created by hand a

nd are an integral part of a young woman’s dowry. When a daughter is born, a large piece of cotton is brought to a village woman, the kalamkash, who sketches am elaborate design onto the cloth and divides it into strips (Union Purl, 2009). The portions of cloth are distributed to the women of the family who will work on them individually, returning them when finished for reassembly. This piece will become a symbol of the bride’s first home and family. As for the young girl, from the age of six, she learns and practices her embroidery skills on suzanis which will eventually be used to decorate her home.

A typical suzani pattern (above, Heilbrunn, 2007), features a central medallion surrounded by flowering shrubs and floral sprays, especially tulips, carnations and irises. It is not uncommon to find other natural patterns: leaves and vines, fish, birds (left, O’Connell, 2009) and fruit, especially pomegranates. The embroidery is traditionally done with silk thread although the colour seems to vary by region, both vivid and muted colours being used.

The very root of the word suzani is the Persian word for needle and the patterns, while complex, traditionally use only chain, satin and buttonhole stitches (bottom right, Union Purl, 2009). The base stitches are done with silk thread but one of the characteristics of suzanis is the extensive use of couching. This technique allows the use of thicker, sometimes metallic, threads that do not draw so well through cloth (top right, O’Connell, 2009). They are laid on the fabric and sewn into place with a second, finer thread. 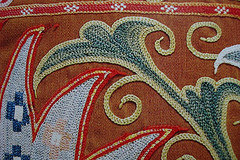 While the oldest suzanis identified are only a few hundred years old, there are references in court records to embroidered textile wall hangings that fit the description dating back to the 15th century (below, Wikipedia, 2012). It is an art form still alive in this region however and still a part of the daily life of the people. 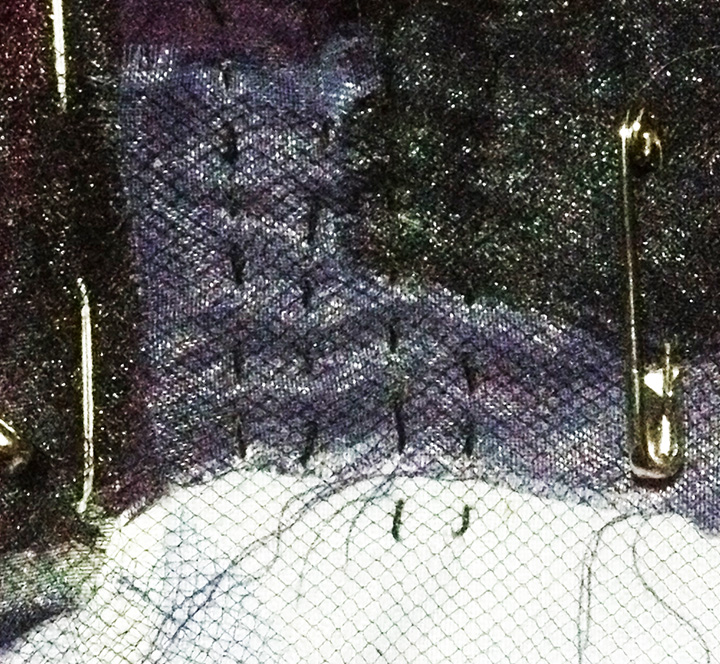 Shaky little stitches , tentative and uneven. I’m almost reconsidering my quest to undo the bad habits that two decades of self-taught hand-sewing have left me with. Over the span of a small work they aren’t noticeable but, as the size of my pieces grow, the problem continues to compound, adding unnecessary hours.

I learned from photos and diagrams the first time around; this time I headed to youtube, watching clip after clip until one showed me from the right angle and it was clear enough to try. A respectable 10 SPI but each of those inches took 5 minutes.  The stitches above are the first on a piece that will measure 36″x60″ and will be completely covered with running stitch.

By my estimation, I’ve got 2, 154 square inches left to cover… the first 6″ are the hardest, right? If I just concentrate on my form and my breathing, I’ll make it to the end.

This was more play and practice using chiffon, tulle and other see through things. I even cut the end off of a pareo to do it (I can refinish the edge with some woolly thread, no biggie).

I originally tried this with smaller squares and WAY more fabrics but it got to look a little dark and muddy, not the effect that I was going for at all.

Now, if I’m to do this properly, I’m going to follow it up with overstitching done by hand in different colours of thread to see if that has any effect on the colours as well.  I might actually play with some tertiary colours without meaning to what with the complimentary mix gong on already. It was fun but I might shift it around a little more before I baste it all down with long white running stitches (to be removed later of course).

I see irises and pansies.

I’ve noticed that the title of a lot of my posts start with the word Playing.  I’ve got a long history of making this tough on myself and I like this version of work much better.

So. To challenge myself a little (because my life isn’t challenging enough), I took a picture from the file of Images That Speak To Me.  What? Don’t you have one? Haven’t you been flipping through a magazine and stopped on an ad or an article just for the sheer sake of what you see in front of you, not the product that they may be selling.  Something about the colour or the perspective, the texture.  Could be anything but it says something to you even if you don’t understand what it’s saying. 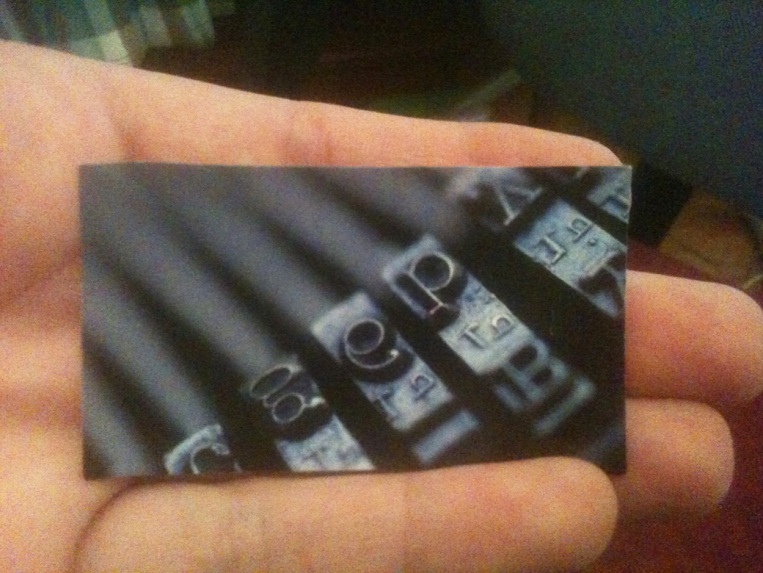 The original image is 1 1/2″ x 2 1/2″. The interpretation is 5″ x 8″.  There are piles of rejected strips of fabric on my worktable.  This one was too purple, this one too swirly, this one the entirely wrong shade of blue altogether.

There’s still a long way to go before this is completed, all I really have is the beginning but, as far as beginnings go, this one is good. What does the original image say to me?  I’m not telling until you tell me what it says to you.

I’ve sliced and diced and rearranged and reassembled and I have a banner of sorts.

When you use this technique with a close colour range, ie. a lot of colours that are very similar like in this case a range of browns, it becomes more about shading.

I like it that way.  I’ve used it before with a wider range (it was a mystery quilt, I didn’t know what I was in for) of blues and I liked it but not the same way. There wasn’t enough dark and the pale blues took over, if I had known, I would have tightened the range and darkened the entire thing.

Shading can be a challenge with quilts as you deal with discrete blocks, too much difference between shades and hues and it starts to look a little too pixilated. A sharp edge throwing off the harmony of the hills and valleys.

The pattern is based on Florentine needlework
(although the Italians actually called it Hungarian needlework, I don’t
know what the Hungarians called it). There was a mathematical progression to it and doesn’t that sing to my inner statistician?

I’d like to do a landscape like this, really close gradation and long sweeping hills with dark earth, maybe leading up to a pale blue sky with a strip of yellow.

Yep, everything becomes a landscape and it’s all about the prairies for now.  I like playing with monochromes, never done browns before but have played with blue a lot.  That will be my next strip piecing adventure, something in blue, something a little more modern for such an old technique.

Maybe I’ll treat this one as a background and see what happens.

This will be a short post brought to you by the Committee for the Education of Joe on Quilting Terminology (we’re so official that we don’t have an acronym).

Bargello is a two step process.  Basically, you cut up fabrics and sew them together into a new fabric.  Sounds like regular piecing, I know. THEN, however, you take that new fabric that you made (pictured left for those who like the visuals) and you cut it up again only in a different direction.

So. My fabric is pressed and I’m ready to start cutting… again.

So I’m fascinated with wrought iron fences. Always have been. The really ornate ones down in the South almost look like lace but are intensely strong. It’s kind of a neat paradox.

I’ve been walking around the neighbourhood a lot in the mornings and I’ve noticed a lot of them in the area.  Probably because I’m surrounded by heritage houses.  This one is located on Spence Street, between Portage and Broadway.

I’ve got the original picture up there for reference but there were a few changes just for scale.  I couldn’t get quite as many curves into the top part without sacrificing smoothness.  This is done with bias cut strips of cotton sewn onto a strip of (sparkly!) cotton that measures about 18″x6″.  I cut the strips in 1/4″, 1/2″, and 3/4″ widths.

I’ve used this technique before for Celtic knots but haven’t done anything with the pieces yet.  I have ideas for a few more but, as weird as it is, as soon as I’ve finished these work-intensive hand sewn pieces, I want to take my rotary cutter and slice them up into smaller pieces.  Right through all of the little strips of 1/4″ fabric that I just spent weeks stitching smoothly into place. 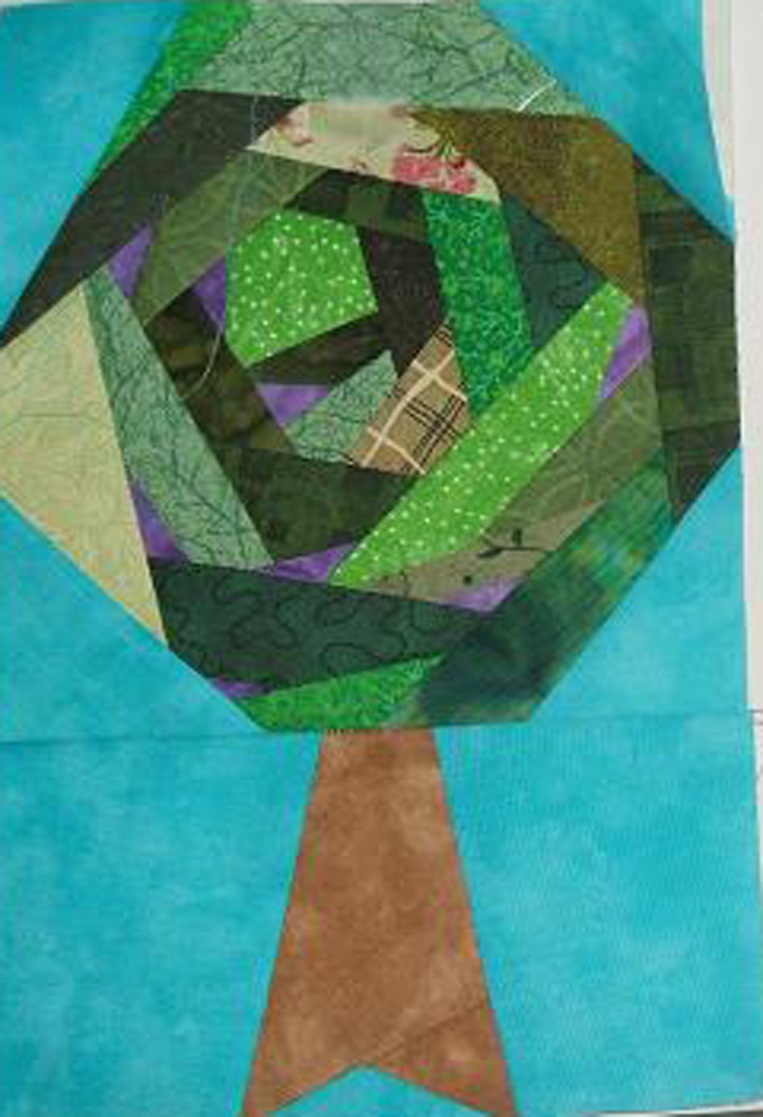 So I sort of have a deadline on these pieces now as the farm has sold. I’m intending to give them to my step-mother Margaret to remind her of their little farm once she moves.  The possession date is November 1 so I’m aiming to have them bound and completed before then.

I’m loving the paper piecing and I’m riding that learning curve for all it’s worth.  The precision corners are the best part.  I did the two trees today as well as two pears and one watermelon slice.  I’m not sure that I’m grooving on one of the pears but i don’t really feel like changing it.  I’ll just have to pull it together in the end.

Someone offered me a whole case of overripe bananas this afternoon, just out of the blue.  I’m going to pick them up in the morning.  Banana bread with chocolate chips, mmmmmmmm.